Mary is taking the Eshana Crocheted Wrap Class at Westport Yarns. She was losing stitches progressively as she crocheted. I had her start the wrap over and during class we would rip out the first effort. Then, to remedy the situation, I taught her to put a locking stitch marker in the turning chain of each row. That way she is always sure she has found the correct end stitch. She’s also going to count to make sure she has the right number of filet boxes.

Eileen is finding that she’s ripping out mistakes rather than leaving them in. She doesn’t know what’s come over her; she used to be such a carefree knitter!

She finished a Simple & Easy Hat (drawstring version) in Baby Blossom Chunky (Bulky: 70% Acrylic, 30% Nylon, 170 yards).  Together we made a pompom with a Clover Pompom Maker.

Eileen finally found a pattern for Torino yarn in her stash, the Deux Verres poncho. I name of this pattern literally translates to “2 glasses of wine”. Reminds me of a book called Pints and Purls where projects were rated by the type of alcohol you could consume while knitting it. (Torino is a long ago discontinued yarn.)

She’s working on the short row strip in the Building in Color Afghan. When she realized she didn’t carry the yarns (as directed), she decided to leave it. Thank goodness there is a little of the old Eileen left. Yarn: Plymouth Worsted Merino Superwash (Worsted: 100% Merino Superwash, 218 yards).

Rose was ready to finish her Ponchini. She was a little concerned about whether it would fit since she ran short of yarn. We pinned it together and were relieved to see that it fit perfectly.  We traded tasks, I did the mattress stitch for her, she ripped out Mary’s wrap.

Nan is making a Minnie Mouse Intarsia blanket for her grandchild in Plymouth Worsted Merino Superwash (Worsted: 100% Merino Superwash, 218 yards). I taught her how to make yarn butterflies to use versus bobbins (for the different colors). 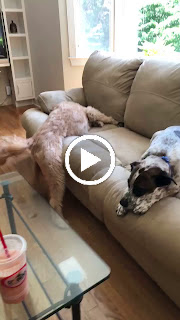 Tucker does this every.single.time he eats. I think his muzzle gets itchy. Harry is over it.