Calann is asking herself, “what was I thinking?” as she knits bobbles in the Emilia Poncho in Nordica (DK: 100% Merino, 136 yards).

There was another potential typo in her Elephants on Parade pattern. We looked at the chart for clarification. Yarn: Plymouth Select Superwash (Worsted: 100% Merino, 218 yards).

She went back to Bibbe. Bibbe and Eleanor are playing nicely. She is under one stitch and she is not loosing sleep over it. Especially after she ripped back 8″ because she had “over-knit” the length and would have run into yarn quantity issues. Yarn: The Fibre Co. Arranmore Light (DK: 80% Merino, 10% Silk, 10% Cashmere).

Eileen ripped out Sari, Not Sari because her stitch counts were off. She was (rightfully so) proud that she figured it out on her own. It looks great.  She mentioned she keeps forgetting to work the last decrease, I suggested she put an extra marker to remind herself.Yarn: Hedgehog Fibres Cashmere Merino (Lace: 50% Merino, 50% Cashmere, 328 yards). 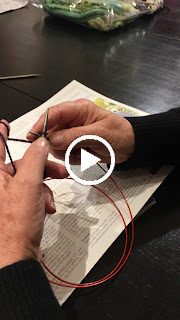 She learned the cable cast on in order to cast on for the Churchmouse Twice Reversible Ribbed Poncho in North Light Fibers Atlantic (Worsted: 100% Falkland Islands Merino Wool, 170 yards). She told me, “whatever you say ‘teach’ – except swatching”. Eileen is not doing a swatch, she cast on and is knitting on. Live by your own choices. Tough love, baby.

Jane is knitting Maeve, a lovely wrap in Lux Adorna Knits (DK: 100% Cashmere, 140 yards). She is changing (6) colors and is also asking herself, “what was I thinking?”. She is tired of starting and stopping and wants to be done with it. This falls under the banner of learning what you like and don’t like to do.
yards).

Cornelia finished back of her customfit cardigan. She’s on a mission, and cast on for one front. Yarn: Knitting Fever Painted Cotton (DK: 100% Cotton, 357 yards).

Harry caught his reflection in the mirror and did not to know what to do. He simply stared (at himself).

3 replies to What was I thinking?