It was great to be back with my Tuesday Stitch and Chat Ladies. I’ve missed our sessions!

Her daughter liked the yarn and stitch pattern so much that she asked for a matching scarf. That’s such a rewarding feeling when your knit gifts are not only appreciated, but leave them wanting more!

Allison brought in a yoke sweater she knit years ago for show and tell. It is a beauty.

She knit the Tucker Hat in Plymouth Baby Alpaca held double (Bulky: 100% Baby Alpaca, 110 yards). She was experiencing floppy pompom syndrome. Never a good thing. I showed her how to use a button to secure the pompom: take a (flat/no shank) button and hold it to the inside of the hat. Draw the pompom threads through (different) holes in the button to the wrong side of the hat. We used a threader. Then tie the threads by pulling against the button to secure it.

The button allows more torque to hold the pompom firm.

We repeated the process for a Rock the Pompom hat Mallory had finished.

Allison and Trammi were both casting on for hats that began at the top and were worked on two circulars rather than double pointed needles. When using two circulars, it’s a good practice to use either two different lengths or color needles so you you are using the right ones at all times. 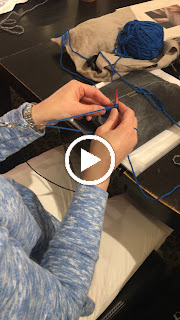 She finished her Puffy Cable Cowl in Artyarns Cashmere Glitter.

Calann had me check her swatch for the Simple and stylish quick knit top down – P113 baby sweater.

She had a mis-stitch in the wedding garter she is knitting.

While knitting away during Stitch and Chat classes, our conversations run the gambit. We talk about food, plays, books, and just about anything else that comes to mind. What’s that expression? If it’s on your mind it’s out of your mouth? Please someone tell me what that expression is! Today was no different.

What a drag it is getting old
“Kids are different today, “
I hear ev’ry mother say
Mother needs something today to calm her down
And though she’s not really ill
There’s a little yellow pill
She goes running for the shelter of a mother’s little helper
And it helps her on her way, gets her through her busy day
Trammi said that she thought a mother’s little helper was the young girl you hired to help out with your kids. Calann and Trammi are both right, they are speaking from different generations.
Jane T said her mother had many expressions, one of which was, “If you sing before breakfast, cry before night”. I looked it up, it goes back at least 500 years!  “This idea originated in the classical notion that a person should not celebrate the day’s achievements in song before the day’s business has begun.” Here is a link, if you’re interested. Another interpretation was that it was meant “to keep kids from getting into mischief or just stay quiet”.
Calann came up with one of her own, “You can grow all the marijuana you want, just don’t have a baby in the bathtub”. Fairly self explanatory, don’t you think?
Our book conversation led to these titles:
Pachinko byMin Jin Lee
News of the World byPaulette Jiles
The Immortalists byChloe Benjamin
Feast of Sorrows byCrystal King

Tucker is making a bid for joining class by showing how well he can sit in a chair at the table.
I know this was a particularly long post. There was a lot to share. Please share via comments any expressions your parents used to say as well as any good book recommendations.